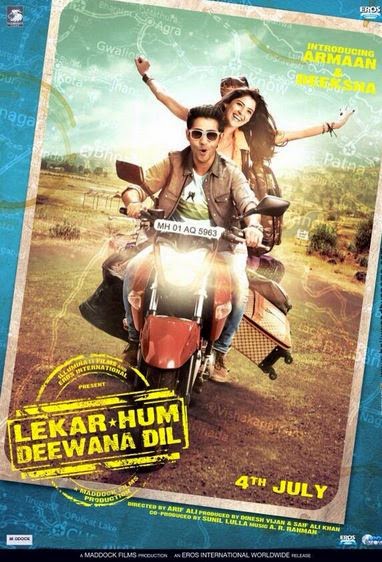 One Word which describes the film – Crap

The film marks the directorial debut of Arif Ali , Imtiaz Ali's brother .
The promos of the film looked promising as it was being produced by Saif's company Illuminati films and music was by A.R.Rehman.

Close to it's release date all the buzz related to the film died and there was almost no promotional activity. When I reached the theater , it was fully deserted and there were just 6-7 poor souls. The film started with the popular 'Khaleefa' song. After that the film became so nonsensical that within 30 minutes half of the audience left the theater.
Armaan Jain, with his thick eyebrows and bad hair looks like a kid and fails to put any emotions in any scene or dialogues. His character calls his girl friend 'jaaneman' every now and then like Saif of Love Aaj Kal , is carefree and a party animal like Sid of 'Wake up Sid' and is confused about his feelings for his best friend like Jai of 'Jaane tu ya Jane Na'.
Deeksha has already acted in many hit South Indian films , so although she is confident ,yet the story doesn't give her much scope to show her acting talents.
The melodious songs which came after every 15-20 minutes were the only welcome relief.
The film has performed badly all over India and in many cities many shows were cancelled because of no audience. It will be a difficult task for the film to even collect 2-3 crores over the week and without any doubt is the worst bollywood debut of 2014.

In a line, when the hero himself tells you that his love story is an epic failure , you should take it as a warning and steer clear of this romance.
Highly Avoidable.
Posted by Riya Agarwal at 10:32